Our event has been canceled due to the New York City Covid vaccine mandate. We apologize in advance for any inconvenience this may have caused for our supporters and we hope to be able to host another event soon.

To view the live streams from the our last event: CLICK HERE 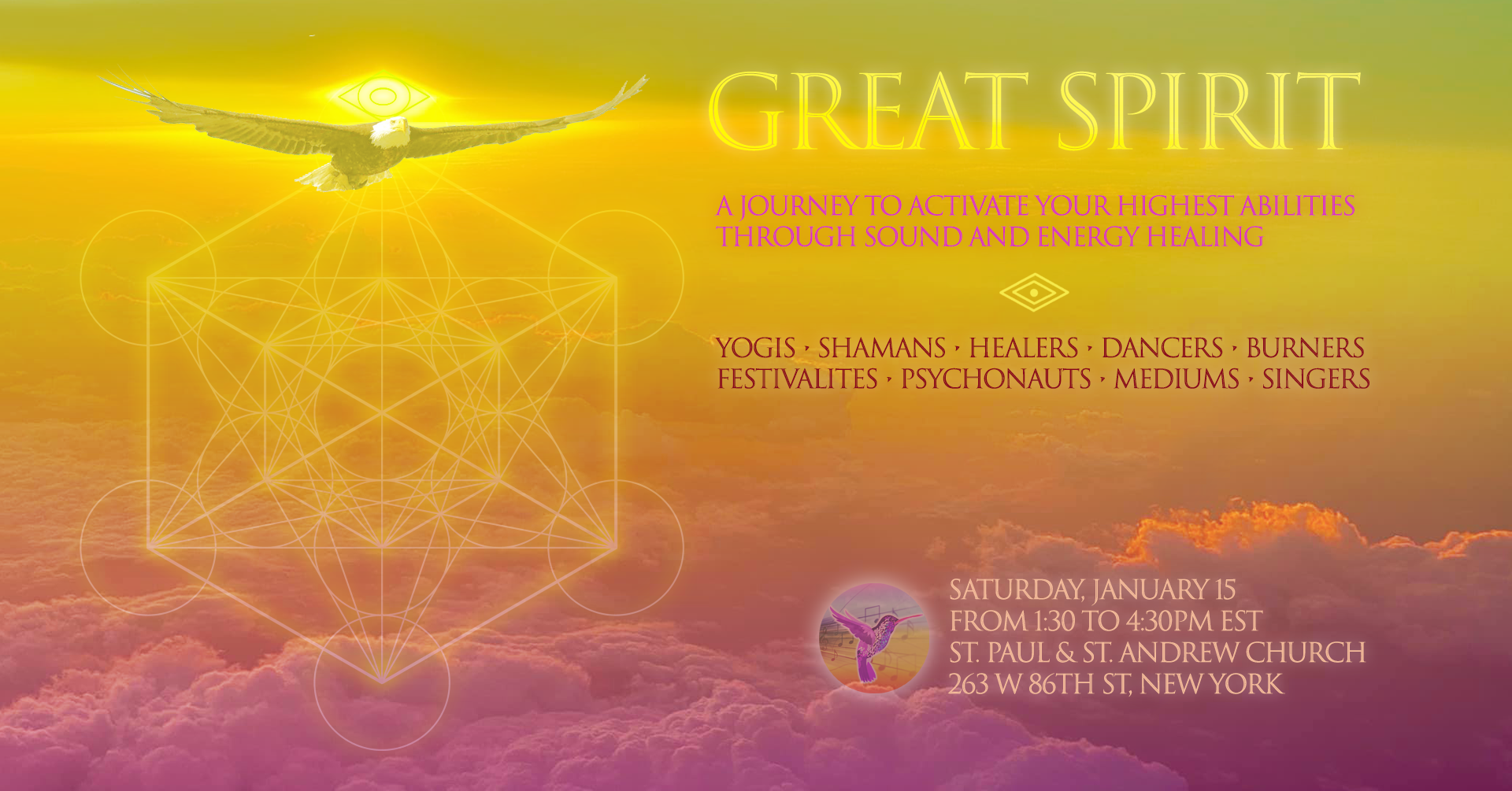 Sacred Sing is a new project intended to bring music, healing & peace to the masses, through televised ‘Concerts for World Peace’ in university stadiums with tens of thousands of participants, and Sacred Sing events that take place at conscious festivals, in cathedrals & temples, and in other large communal gathering spaces, which may or may not be televised or aired on the internet.  At this time, we are a small team of visionaries with a grand vision. We are in the process of enrolling powerful partners in the entertainment industry, universities and spiritual communities.  We have produced several smaller sound healing concerts, in Miami & New York, for up to 200 participants.

In the column on your right is a list of songs that have been suggested for Sacred Sing events.  This is just a short list — there are hundreds of beautiful songs that would be awesome for a massive singalong! As you consider these songs, please imagine the songs being performed and sung along together, by crowds of people from all races, cultures and spiritual paths — and you will feel the power of this vision.

About the Concerts for World Peace

The concerts will feature the university students, and choirs and singing groups from all religions and spiritual paths will be invited from the surrounding area to participate:

→  Dance will also be a huge part of these concerts, and all kinds of dance groups will participate, so that we have literally thousands of dancers in the concerts. The students in the performing arts programs and university choirs will provide the creative leadership to produce and stage the concerts.

→  The concerts will be singalongs, with the crowd in the stadium — and the massive audience watching the concert on TV will be encouraged to join in. Groups of families, friends & community will gather in homes, churches, clubs & community centers to join the televised singalong. The folk music revival of the ’60s got millions of people to sing together — the internet now makes it easy for anyone to learn & practice songs in advance, ensuring that the nationwide — and ultimately international — audience participation will be quite powerful.

→  The concerts will include a portion that is purely sound healing, that will feature hundreds of sound & energy healers, with crystal bowls, gongs, drums, didgeridoos & other sound healing instruments, and singers & speakers of ‘celestial light languages’.

→  The concerts will be filmed by the university film schools. An evening’s television program might include several or even many concerts happening at the same time in different universities. An evening could feature the universities of one state of our nation, or the show could ‘hop’ all over the U.S. during one evening’s presentation.

→  Major recording artists and other celebrities may be involved in these concerts; however, we want the lead singers to be university students & choirs — this is a ‘We the People’ peace movement!

Our intention is for the Concerts for World Peace to be televised on a major TV series we’re proposing called ‘Great Spirit’. The Great Spirit TV series would also feature:

→  The Family of Light, an extraordinary multicultural tribe of light workers, spiritual teachers, and artists. We will discover these tribes as we visit sacred sites, festivals and intentional communities around the United States.

→  The evolution of the university social consciousness and construct — to provide a more tribal, spiritual and holistic experience for students. To achieve this, the Family of Light will bring the ‘conscious festival scene’ or the ‘transformational village festival scene’ to university campuses — and the TV show will bring university students to the festivals — for this is the cutting edge of progressive society, and it is where the tribal, multi-cultural, spiritual and holistic practices thrive and are most honored.

→  The ‘Juicy & Green’ project, helping university student populations get healthy — on TV. Great Spirit will expose the systemic collusion between universities and fast food chains — so the universities will stop poisoning the students, and provide better fuel for a better education and a healthier society. One possible corporate sponsor for this project is Suja Juice — Suja sponsored 2 of our smaller events, and their Miami office has expressed enthusiasm for our larger visions.

→  One major U.S. university will develop the Great Spirit TV show, and the Concerts for World Peace project. We’re seeking that university now.

→  It is important for the Concerts for World Peace to include songs from many cultures, and to have the songs performed and sung along to in different languages. The concerts must also be FUN, lively and full of variety and surprises. And we do not expect that crowds will ‘have to’ or ‘be able to’ sing all of every song — we don’t want to limit the scope or magnificence of the music we choose for the concerts. Soloists and choirs may deliver the more challenging parts of songs, and crowds may sing only the refrain — there’s lots of possibility in producing these concerts.

To view a clip from our Sacred Sing event, please visit | YouTube

The visionary leading the Sacred Sing project is Alan Pratt, a spiritual healer, psychic & performance artist.  A life of music has led Alan to this grand vision:

→  In the 1970’s, Alan attended Forest Hill High School in West Palm Beach, FL, home of the most award-winning choral department in the history of the state of Florida. This choir participated in the annual ‘Singing Christmas Tree’ at DisneyWorld with 3000 singers — this is where Alan first felt the power of a crowd singing together.

→  In 1999, Alan proposed a worldwide Moment of Sound, to occur during the opening and/or closing ceremonies of the Olympic Games.  Alan mailed proposal packages to 23 Olympic committees in 16 countries. The head offices of the International Olympic Committee expressed interest in the project, but never followed through. Alan is still committed to creating world peace by ‘getting the world to sing together’.

→  In 2002, Alan led a team to generate a Moment of Sound with thousands of people during the 1st anniversary memorial of the September 11 terrorist attacks, at the site of the World Trade Center in New York City.

→  In 1985, Alan and his partner were diagnosed with AIDS. Alan’s partner died in 1986. Alan was ‘healed by the angels’ and was completely free of AIDS/HIV in 1988. Alan, at 58, is extraordinarily healthy, and tours the U.S., healing thousands of people — by singing. Alan has been credited with dozens of ‘miracle healings’, including multiple forms of cancer, and Fox News Miami aired a feature on Alan’s work in 2015. Alan knows the power of music and the power of the human voice. Alan is destined to be one of the light workers who brings music, peace & healing to the masses.

BELOW You’ll Find a list of songs that have been featured at, or suggested for our initial Sacred Sing events

WE SHALL OVERCOME – MOREHOUSE COLLEGE

What The World Needs Now Is Love (Burt Bacharach)

Man In The Mirror

We Are The World

It’s About Time — Let Us Begin

I’ve Got The Music In Me

Lean on Me (Bill Withers)

Get Together (The Youngbloods)

Somewhere Over the Rainbow / What A Wonderful World

I Believe I Can Fly (R. Kelly)

Somewhere (from the musical West Side Story)

I Believe in You

The Flower Duet (Leo Delibe, from the opera Lakme)

Now We Are Free

I’ll Be There (The Four Tops)

WHERE HAVE ALL THE FLOWERS GONE

Across The Universe (Rufus Wainwright)

Everybody Rejoice, The Wiz

THE POWER OF THE DRUM LINE

University marching bands will participate in Sacred Sing events, and the rhythm & power of the Drum Line will maximized by bringing together drumming tribes from many cultures. A Clip From ‘Drum Line’

From the documentary Baraka | Explore